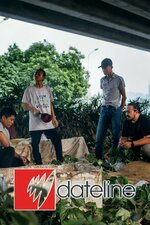 Follows the Australian medieval fighting team as they compete at the Battle of the Nations. Plus, meet the prison inmates who are running their own vineyard in Italy.