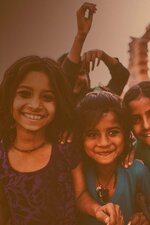 Possible reasons why thousands of Canada's Indigenous female population have gone missing over recent decades. Plus an analysis on how Australia might be able to learn from the way Canada's government has addressed the issue.