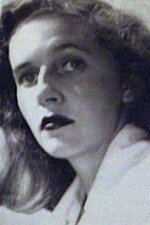 Dorothy Hewett was one of Australia's first female playwrights. She was known for her controversial subjects and was a critical female voice in an era when the industry was dominated by men.