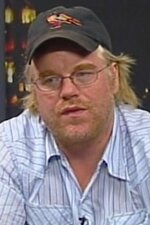 Margaret Pomeranz speaks to Philip Seymour Hoffman in 2004 about his career in acting, and his role in Richard Kwietniowski's Owning Mahowny.