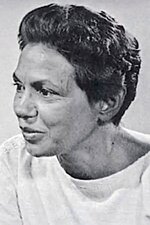 Oodgeroo Noonuccal, known as Kath Walker, spoke to the ABC in 1967 about her life, her work, and her belief that respect is important.