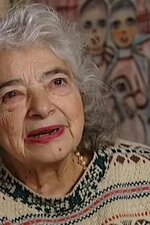 A look at the life of bohemian French-born Australian artist Mirka Mora, who left a mark on the streets, galleries and cafes of Melbourne and became known as a darling of the Australian arts scene.