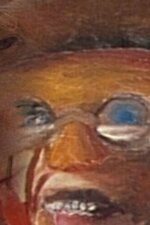 A look at Sidney Nolan's inspiration from the Ern Malley poems, which were later revealed to be an elaborate hoax.