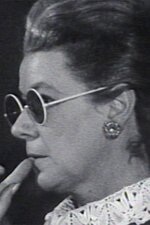 A look at the 1968 Four Corners profile of Sheila Scotter, the former editor of Vogue Australia, and was known for only ever wearing black and white.