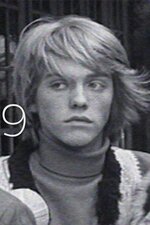 Hair the musical made its debut in Australia in June, 1969, at a time when controversial art suffered from censorship. A reporter confronted the cast about the subject of nudity in the show.