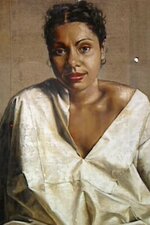 Deborah Mailman speaks to The Art Show about her acting career and love of performing in this clip from 1999, following her AFI award win for her performance in the film Radiance.