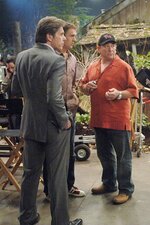 Sam and Dean investigate the death of an actor on a horror-film set after rumours indicate that he was killed by a ghost.