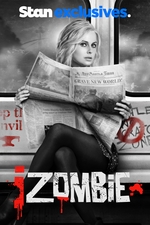 Liv and Blaine come to the rescue of one of their own. They consume the brains of a conspiracy theorist and paranoia ensues. Meanwhile, Liv researches Major’s new friend.