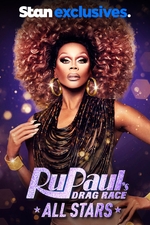 For the final challenge, RuPaul sends her All Stars on a whirlwind junket that culminates with a stand-up routine at L.A.’s famous Comedy Store. Cheri Oteri is their comedy coach and is joined on the judge’s panel by The Gossip’s Beth Ditto.