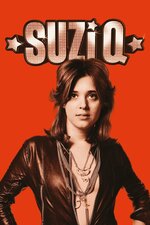 Follows the story of the iconic history-making, rock singer-songwriter Suzi Q, who was instrumental in redefining the role of women in rock music, when she broke onto the scene in 1973.