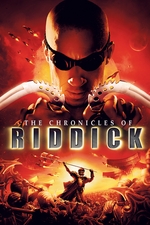 The Chronicles of Riddick

On the run, Riddick finds himself at the heart of a battle that is not his and with future of the entire universe being threatened; he could be the only unlikely hero to save the human race.