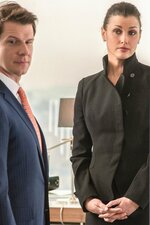 Danny and Erin investigate a cold case in which a rich and powerful man allegedly attacked his girlfriend; an injury during a pick-up game leads to a lawsuit.