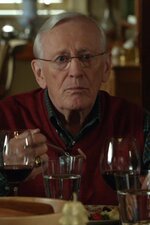 Danny's loyalty is tested when he has to investigate a childhood friend for possible ties to a mob family; Frank thinks a recent judicial ruling may be responsible for a rise in crime.