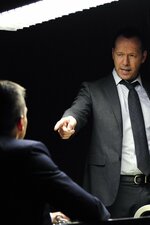 Jamie becomes a target after intervening in an abusive relationship between a thug and his girlfriend; an illegal recording of Henry making insensitive comments is leaked to the press.