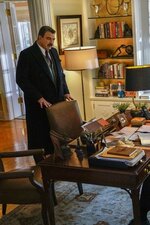 The son of an outspoken critic in the African-American community is murdered; a convicted felon's cause of death doesn't match the injuries he received when the prisoner transport van carrying him crashed.