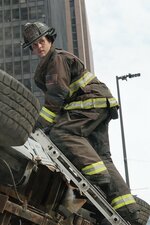 Chief Boden's job is on the line in the wake of a complicated call to a fire; Severide struggles to adjust to his smaller role and the presence of his new commanding officer; Casey works on finding evidence in his investigation against Nesbitt.