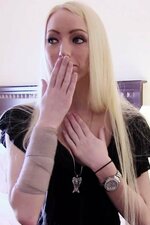 Brian, a former marine asks Jesse to move in with him after standing her up years ago; Weapons of Mass Destruction may have something to do with it.