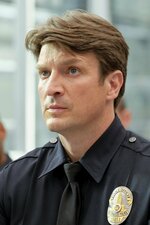 After a life-altering incident, John Nolan decides to pursue his dream of becoming a police officer; as the force's oldest rookie, John is met with skepticism from some higher-ups.