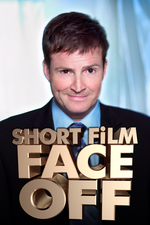 CBC Television presents Canada's only TV magazine program featuring short films by directors across the country. Hosted by comic Steve Patterson, a panel of professional filmmakers, actors and film critics will screen selected films and choose the winner, with the help of studio and online audience votes. The winning director will receive a production deal and a film equipment rental package for a next film, as well as a cash prize. "Short Film Face Off" has helped bring a mainstream audience to the world of short films.