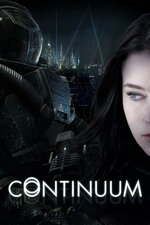 Detective Kiera Cameron is a cop from the year 2077 who was raised to rely on technology more than anything else, even herself. Now she and a group of deadly criminals called Liber8 are trapped in present-day Vancouver. Cameron needs to stop Liber8 before it can take down the corporations which will one day rule the world -- thus altering the course of the future and changing the 2077 that Cameron calls home. She enlists the help of a teenage tech genius named Alec Sadler to help figure out a way to get her back to her own time, and she manages to work with the Vancouver Police Department with Detective Carlos Fonnegra to keep an eye on Liber8. With different ideals and backgrounds, Cameron and Fonnegra clash, but they trust each other, and Cameron is slowly learning to trust herself as well.