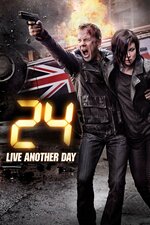 Find out where to watch 24: Live Another Day tonight at the Canadian TV Listings Guide

In London, four years after heroic Jack Bauer became an exile, he risks his life again in hope of thwarting another unthinkable terrorist act. Bauer's CTU confidante, Chloe, is now working underground with an infamous hacker, and James Heller is calling the shots as President of the United States. Tracking Jack are Steve Navarro, the head of the CIA, and agent Kate Morgan, a woman who proves to be both resourceful and ruthless. As the harrowing day progresses, Jack tries to avert a global disaster before it's too late.