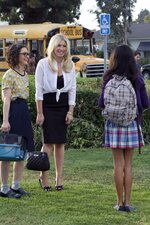 This edgy single-camera comedy is an adaptation of the hit 2011 feature film of the same name. Ari Graynor stars as an attractive-yet-obnoxious and foul-mouthed woman who is unapologetic about her consistently inappropriate behavior. After her wealthy husband leaves her, the former trophy wife finds herself penniless. She decides to masquerade as a teacher as she searches for a new man to support her. From executive producers Hilary Winston, Lee Eisenberg, Gene Stupnitsky, Sam Hansen, Jimmy Miller and Michael Lasker.