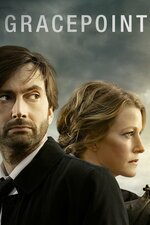 Tragedy strikes Gracepoint, a town in Northern California, when a young boy is found dead on a beach. When authorities quickly declare the death a homicide, the town's residents turn against one another, and a media frenzy erupts. Detective Emmett Carver, a by-the-book cop, is brought in to fill a high position in Gracepoint's police force and lead the investigation. Detective Ellie Miller, who had been promised Carver's position, must set aside her resentment about that and research the case with her new boss.