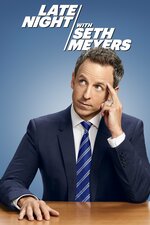 With his signature monologue and sharp newsy segments like "A Closer Look," Seth Meyers hilariously breaks down the day's biggest stories and takes the current political circus head-on. He then welcomes Hollywood's most beloved A-list guests, as well as people not seen anywhere else in late night, like political figures and other interesting newsmakers. With fan-favorite comedy segments that become viral sensations, and the talented 8G band at his side, Seth consistently brings home the last laugh.