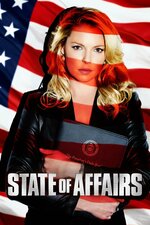 Female CIA-analyst Charleston Tucker assembles President Roberta Payton's daily press briefing, a list of the most-urgent security issues facing the nation. The task requires moral and political decision-making by her team of analysts. Beyond a professional relationship with the president, she also has a personal one, having been engaged to marry Payton's son, before his death in a terrorist attack. As Charlie navigates a complicated personal life and a challenging job, she occasionally shows an edge to mask her grief, but she stands fully committed to the job.