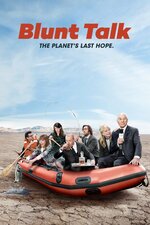 Patrick Stewart stars in a half-hour sitcom as British ex-pat Walter Blunt, who settles in Los Angeles intent on conquering the world of American cable news. He uses his nightly news show, "Blunt Talk," to impart his wisdom and guidance on how Americans should live, think and behave, while Blunt himself often struggles with his life behind the scenes. Besieged by network bosses, a dysfunctional news staff, numerous ex-wives and children, and his own well-intentioned but sometimes misguided decisions, Blunt's only support comes from best friend Harry, his heavy-drinking, devoted manservant.