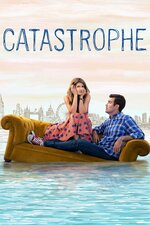 During a business trip in London, an American named Rob meets Sharon, an Irish teacher with whom he shares incredible chemistry. While the two plan to have some fun with no strings attached, things go awry when Sharon learns she is pregnant. The unexpected news inspires the recent acquaintances to try and make it as a couple, despite nonstop complications that include hailing from different countries and a pregnancy that is not without risks. Sharon Horgan and Rob Delaney play the starring roles and write the series.