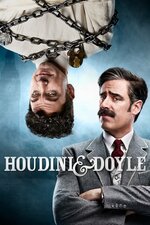 The turn of the 20th-century series follows paranormal skeptic Harry Houdini and paranormal believer Sir Arthur Conan Doyle as they join forces with Scotland Yard to investigate unsolved and inexplicable crimes. The pair teams up with Adelaide Stratton, the first female constable of the London Metropolitan Police Force, and together they delve into cases involving purported vampires, ghosts and monsters. When their wits are challenged, Doyle's sense of the supernatural clashes with Houdini's quizzical doubts, often leaving Stratton caught in the middle. Though their diverse views make working together a challenge, they also lead to new and profitable speculations. The series is inspired by the real-life friendship of Houdini and Doyle.