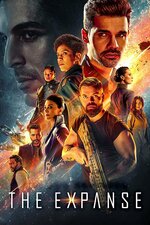 Hundreds of years in the future, things are different than what we are used to after humans have colonized the solar system and Mars has become an independent military power. Rising tensions between Earth and Mars have put them on the brink of war. Against this backdrop, a hardened detective and a rogue ship's captain come together to investigate the case of a missing young woman. The investigation leads them on a race across the solar system that could expose the greatest conspiracy in human history.