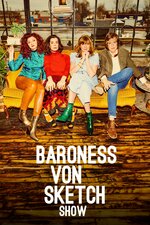 Hailed as "the funniest thing on Canadian television since `Kids in the Hall,' " the award-winning "Baroness von Sketch Show" premieres to a U.S. audience courtesy of IFC. The all-female comedy series is created by and stars veteran Canadian actor Meredith MacNeill and Second City alumni Carolyn Taylor, Aurora Browne and Jennifer Whalen, who satirize modern life's everyday concerns, from the pretentiousness of ordering a fancy coffee to office and sexual politics. Other popular skits include a riff on being relegated to the over-40 section of a gym locker room, and a theory of what a women-only leadership summit would be like.