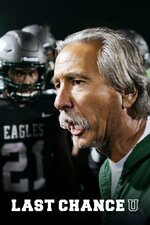 This Netflix original series follows college football teams that aren't major programs and don't get much national attention. After a couple seasons of profiling recruits at East Mississippi Community College, which has won several NJCAA national titles, the reality series shifts its focus to Independence Community College. The Kansas school doesn't have the same type of gridiron pedigree as EMCC -- it's trying to rebound from more than a decade of losses -- but the players are dealing with many of the same challenges that the EMCC squad faced -- both on and off the field.