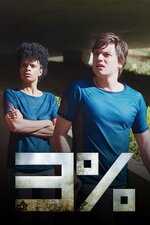 In the distant future, most of the population lives in poverty in an area known as the Inland. There is an elite group, though, that is chosen to live in a virtual paradise, the Offshore. Every year, each 20-year-old gets a chance to make it to the island paradise by taking a series of tests. Only three percent of the candidates succeed and qualify to leave the impoverished Inland area. One of the newest residents of the Offshore is Michele, a naive young woman with no family who has a strong sense of justice.