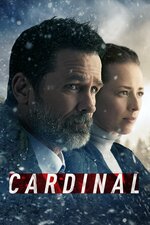 Cardinal is now available to stream and watch online:

"Cardinal" is based on the novels of crime writer Giles Blunt and focuses on detective John Cardinal and his partner, Lise Delorme. The two detectives investigate crime in the city of Algonquin Bay, such ones can include the murder of a young girl. Cardinal works to right past wrongs that could threaten his investigations and his career. The clock is always ticking and Cardinal has to race against the sands of time to save the killers next victims.