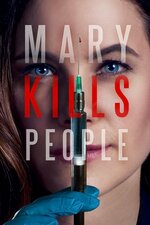 As an ER doctor, Mary Harris is used to helping save people's lives. At night, though, she turns her attention to a different practice. Working with her partner, a former plastic surgeon, Mary moonlights as an underground angel of death. Together, they help terminally ill patients end their lives on their own terms. Mary tries to fly under the radar with her side business -- which she has managed to do for a while -- but her secret career becomes increasingly complicated as business picks up. As her world starts to unravel, Mary realizes she has to fight dirty if she wants to keep the killing-scheme going.