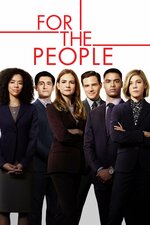 The United States District Court for the Southern District of New York -- also known as the Mother Court -- is the oldest district court in the nation, and the setting for the newest drama from the minds of Shonda Rhimes and Betsy Beers. Focusing on the lives and careers of the brand-new lawyers working for both the defense and the prosecution and handling some of the most high-profile and high-stakes federal cases in the country, "For the People" follows the talented professionals as their lives intersect both in and out of the courtroom.