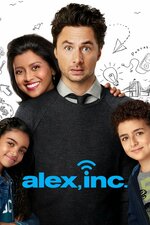 Find out where to watch Alex, Inc. tonight at the Canadian Streaming Guide

Based on the podcast "StartUp" from Gimlet Media, "Alex, Inc." follows Alex Schuman as he embarks on the adventure of starting his own company. Having already found success professionally, as a radio journalist, and personally, as a husband and father of two, Alex isn't satisfied just coasting along and decides to do something crazy -- quit his job and start over on his own terms. He quickly learns that building his own business isn't going to be as easy as he thought, but the payoff will be rewarding.