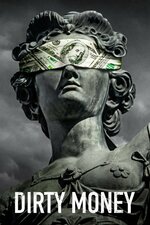 There's a cliche that says "the rich get richer," and while that may be true it's not always done through legal or moral methods. This docuseries takes a look at stories of scandal and corruption in business, exposing acts of corporate greed and corruption.The episodes feature firsthand accounts of the unscrupulous activities from the perspectives of both the perpetrators and their victims. Some of the tales that are told include a car company that cheats emissions tests to save money and the drama and shady deals that abound in Donald Trump's business empire.