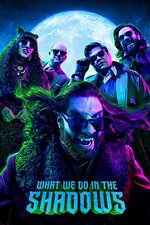 What We Do in the Shadows

What We Do in the Shadows is now available to stream and watch online:

What We Do in the Shadows Episodes

Watch episodes of What We Do in the Shadows online:

Based on the feature film of the same name from Jemaine Clement and Taika Waititi, "What We Do in the Shadows" is a documentary-style look into the daily (or rather, nightly) lives of four vampires who've "lived" together for hundreds of years in Staten Island.The self-appointed leader of the group is Nandor the Relentless, a great warrior and conqueror from the Ottoman Empire. Then there's the British vampire Laszlo -- a bit of a rogue and a dandy and a fop, he might say. He's a lover of mischief and a great soirée, but not as much as he loves seeing Nandor fail miserably in every attempt. And then there's Nadja: the seductress, the temptress, the vampiric Bonnie to Laszlo's Clyde. Also cohabiting in the vampire household is Guillermo, Nandor's familiar; and Colin Robinson, an energy vampire and day-walker of sorts -- he feasts on humans, but not on their blood.