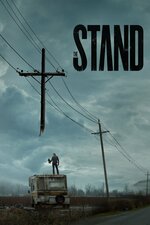 "The Stand" is author Stephen King's post-apocalyptic vision of a world decimated by plague and embroiled in an elemental struggle between good and evil. The fate of mankind rests on the frail shoulders of 108-year-old Mother Abagail and a handful of survivors including Stu Redman, an ordinary working-class factory man; Nadine Cross, a deeply conflicted woman; Frannie Goldsmith, a pregnant young woman; and Nick Andros, a young deaf and mute man. Their worst nightmares are embodied in a man with a lethal smile and unspeakable powers: Randall Flagg, the Dark Man.