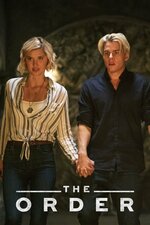 When Belgrave University student Jack Morton joins a fabled secret society, the Hermetic Order of the Blue Rose, he is thrust into a world of magic, monsters and intrigue. Out to avenge his mother's death, he uncovers dark family secrets and lands in an underground battle being waged between werewolves and practitioners of dark magic. Assisting Jack in the fight is Alyssa, a tour guide at Belgrave and fellow member of the Order, which is led by Jack's estranged father.