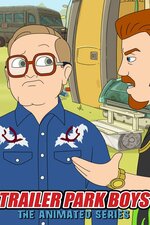 Find out where to watch Trailer Park Boys: The Animated Series tonight at the Canadian Streaming Guide

Julian, Ricky and Bubbles -- the titular Trailer Park Boys -- have a history of going on strange adventures that seem like they're better suited for a cartoon than a live-action show. So it's appropriate that after a dozen seasons of the original series, the guys get animated in this cartoon that's not intended for kids. The series picks up where Season 12 left off -- with the trio in jail. But when the guys realize that they've been transformed into cartoons, they test the limits of their new reality, approaching it with a mixture of fear and excitement.