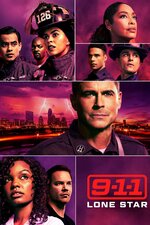 Add to my Watchlist
Find out where to watch 9-1-1: Lone Star tonight at the Canadian Streaming Guide

Nearly 20 years ago, Owen Strand was the lone survivor of his Manhattan firehouse on 9/11, and in the wake of the attack, was left with the unenviable task of rebuilding the station. After a similar tragedy strikes a firehouse in Austin, Texas, Owen -- along with his troubled firefighter son, T.K. -- takes his progressive philosophies of life and firefighting down to the Lone Star State to help them start anew. On the surface, Owen is all about big-city style and swagger, but underneath, he struggles with a secret he hides from the world -- one that could very well end his life.