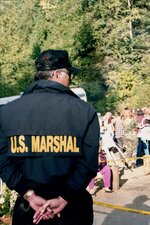 Eyewitness accounts of the 1992 FBI siege at Ruby Ridge include the daughter of Randy Weaver, the man arrested following a standoff with police, and the federal agents on the scene.