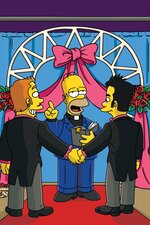 There's Something About Marrying

Homer tries to cash in on Springfield's new law allowing same-sex marriages by becoming an ordained minister via the Internet.