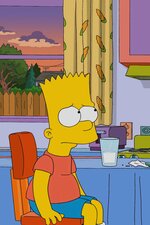 Marge follows Bart around in an effort to get him to confess to being involved in a bulldozer crash; Homer ignores Santa's Little Helper when Flanders brings a new dog home.