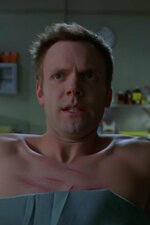 Ned thinks it's an open-and-shut case when he tries to figure out who killed a renowned dog-breeder, until he realizes the dead man was a polygamist with four wives.